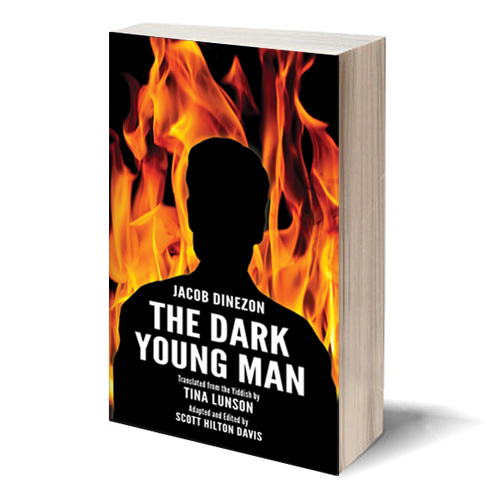 Jacob Dinezon was born in New Zagare, Lithuania in the early 1850s. His father died while he was a young teenager and he was sent to live with an uncle in the Russian town of Mohilev.

An excellent student, Dinezon was hired by a wealthy family to tutor their young daughter. While living in their household, he became a trusted member of the family and was soon promoted to bookkeeper and manager of the family business. Through this family, Dinezon was introduced to the owner of a famous Jewish publishing company in Vilna called The Widow and Brothers Romm, which published his first novel, The Dark Young Man, in 1877. The book became a runaway bestseller.

Moving to Warsaw in the 1890s, Dinezon quickly became a prominent figure in the city’s Jewish literary circle. He befriended almost every major Jewish writer of his day, including Sholem Abramovitsh, Sholem Aleichem, and I. L. Peretz. These writers are the classic writers of modern Yiddish literature, and Peretz became Dinezon’s closest friend and confidant.

Over the next twenty years, Dinezon published several works of fiction, including A Stumbling Block in the Road, Hershele: A Jewish Love Story, Yosele: A Story from Jewish Life, and The Crisis: A Story of the Lives of Merchants. He wrote sentimental novels about urban life in the Russian Empire and focused on the emotional conflicts affecting young people as modern ideas challenged the traditional religious practices of their parents. As in The Dark Young Man, the plight of his characters often brought tears to the eyes of his devoted readers and remained in their memories long after they finished his stories.

During the First World War, Jacob Dinezon helped found an orphanage and schools to care for Jewish children made homeless by the fighting between Russia and Germany. He died in 1919 and is buried in Warsaw’s Jewish cemetery beside I. L. Peretz.

Learn more about Jacob Dinezon’s life and career at www.jacobdinezon.com.

Questions and Topics for Discussion

1. At the very beginning of The Dark Young Man, Jacob Dinezon provides an almost cinematic view of the streets in the Jewish section of Mohilev, the dire life of the underpaid watchmen, and the contrasting conditions between rich and poor. How does this establish the novel’s mood and tone?

2. When we first meet Yosef, he is living the life of a poor yeshiva student—an “idler”—in the Mohilev study house. How do Yosef’s poverty and social status affect his prospects as a potential bridegroom?

3. Dinezon tells us that people always called Meyshe Shneyur by his two names. Dinezon goes on to say, “His countenance, dark as a Moor, made an impression on people when they first met him. This impression was so strong, they immediately forgot his two names, and referred to him instead as ‘the Dark One’ or ‘the Dark Young Man.’” What cultural associations and stereotypes are associated with these terms? How does Dinezon’s description of Meyshe Shneyur influence our understanding of his character?

4. Yosef’s father wants his son to become a Talmud scholar and rabbi, but once Yosef moves into the Fridman household, he begins to have second thoughts. On page 73, Yosef admits to himself, “I am bound by love to my parents and their wishes.” Why do you think he is so concerned about his parents’ feelings regarding his decision to end his religious studies?

5. Why do you think Yosef ultimately leaves the study of Talmud and the possibility of becoming a rabbi to enter a trade or profession? In the end, do you think he made a wise choice?

6. On page 41, Dinezon writes, “In these times when the slave trader is almost unheard of anymore in Europe, and when we are horrified to hear how they conducted their business in Africa, we seem not to notice that family slave traders are still at work in our Jewish communities.” How did you react when you read Dinezon’s comparison of arranged marriages to slavery and matchmakers to slave traders? How did you feel about the process of matchmaking as it is depicted in the novel?

7. What was your reaction to Golde’s memory of falling in love with her cousin, Leybl, and how devastated she was when he married another woman?

8. Dinezon introduces us to several mothers throughout the novel, including his own mother, Golde Fridman, Sterne Gute, Dvorah Bayse, and Sorele Sorkin’s mother Grune. How does Dinezon contrast “good” and “bad” mothers?

9. In your opinion, why did Dinezon spend so much time describing “the enviers” Sterne Gute the busybody and Dvorah Basye the tavern keeper? What role did their characters play in the unfolding of the story?

10. How did you feel when Meyshe Shneyur spent Shavuos eve drinking whiskey and playing cards with Leyb Sorkin the criminal, his wife Sorele, Gason’s son-in-law, and Tevele the Ale Man? What was your reaction to their discussion of the “Laws and Customs of the Son-in-law”?

11. On page 196, Dinezon writes about truth: “Although it may be wrapped up in the most abominable lies and treachery, truth is like the sun shining in the sky. A lie is no more than a cloud that hides the light for awhile, but the truth will always break through the darkest clouds that cover it. The problem is that we do not always see the sun through the darkness, and often the sky must clear completely before the sun reveals itself again. The truth is like that, too. It is never lost, but may not reveal itself at the right time.” Why didn’t Dinezon reveal the truth of Meyshe Shneyur’s crimes in the novel? Why didn’t he punish the Dark One for his evil deeds?

12. On page 198, Fridman discusses the differences between Jews and Christians: “What girl doesn’t like a boy, and what boy doesn’t like a girl? But Jews can’t have anything to do with falling in love. This is just another way for young Jews to follow lockstep after the Christians. Once Gentile ladies started strolling about with parasols, Jewish women wanted to do it, too. . . . Soon they’ll want to allow men and women to dance together at weddings the way Christians do.” Do Christian customs influence Jewish life today? If so, in what ways?

13. Letter writing—both real and forged—plays an important role in the novel. Yosef and Roza use letters to reveal their deepest feelings for each other. Did you ever write long letters to a loved one or family member that revealed your deepest thoughts? How has our modern technology changed the way we correspond with people today?

14. At Roza’s engagement party, Gason says, “I’ve always said your Roza belongs to the old order, but your Rukhame belongs to the new.” What were the major differences between the two sisters and how were they exhibited in the novel?

15. On page 253 in the chapter, “A Doctor In the House,” Yosef tells Roza how Rukhame rescued him and that he is now going to marry her. Roza replies, “You deserve her, dear Yosef,” and goes on to say, “You’ll probably be happier with her than me. She’s more educated than I am, and she’s been reading and studying this whole time. I can see that you’ve changed, too, Yosef, while I’ve become a simple housewife.” Why do you think Roza said this? How did Roza’s words affect you?

16. How did you react to what happened to Rukhame at the end of the novel? Did you expect it? How was it foreshadowed by her words to Yosef on the bridge?

17. What was your reaction to Jacob Dinezon’s portrayal of Meyshe Shneyur at the end of The Dark Young Man? Why do you think the author chose to end the novel in this way?

18. What do you think happens to the remaining family members once Meyshe Shneyur has complete control over them?

19. Dinezon describes the lives of wives, mothers, daughters, and sisters in nineteenth-century Jewish families, and depicts the constraints placed on them by the Jewish traditions and expectations of that time. How have women’s lives changed since Dinezon wrote his novel? Are there still limitations and restrictions based on gender in Jewish communities?

20. The Dark Young Man is set in the Russian Empire in the 1840s. What lessons does it offer to us today about how to live a modern life while still holding on to our Jewish identity and values?

Return to The Dark Young Man