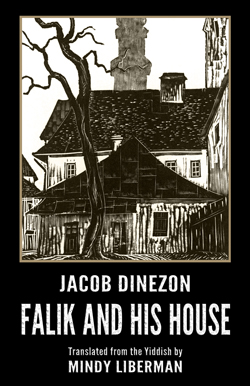 1. In the first chapter, Jacob Dinezon establishes the deep connection Falik has with his house. He portrays the two as old friends who have aged together and gone from prosperity to hard times. How does this depiction of their relationship set the stage for the conflicts to follow? How does Dinezon introduce and develop the themes of home and homeownership, and how do these themes resonate with you?

2. Through the letters they write to each other, Falik and his adult children express conflicting views about repairing the old house. How do their opposing perspectives reflect the differences in their ages and life situations? If Falik and Matle were your parents, would you send them money to repair the run-down house where you grew up or try to persuade them to join you in America?

3. How does Dinezon depict the differences between the town’s working poor and its wealthy residents? How does Falik the tailor’s life differ from Shaya the miller’s circumstances? Do we see similar class differences in today’s society? How would you feel if a wealthy person bought the property across the street from your home, tore down the existing house, and built an extravagant mansion in its place?

4. Scenes of Falik’s religious practices and deeply held faith are woven throughout the story. In his letters to his sons in America, he expresses his concerns about their changes in appearance and displays of prosperity. He fears their new lifestyle may lead them away from their religion. How do you think Falik’s sons reacted to their father’s words? How did Falik’s steadfast religious and cultural attitudes influence his future decisions and actions?

5. We see that Falik loves and cares for his wife, Matle, but criticizes her intelligence and questions her ability to understand logic and reasoning. How did you respond to Falik’s attitude? How did his views reflect the conditions, expectations, and constraints placed on women by the customs and practices of that time? How have women’s lives changed since Dinezon wrote his novella? Are there still gender limitations and restrictions placed on individuals in modern communities?

6. To encourage Falik to sell his house, Shaya Miller says, “The Jewish situation here becomes more restrictive and bitter every day. Our livelihoods suffer, there’s hatred and jealousy on all sides. . . . If only I had children in America who would send for me, I would sell everything, lock, stock, and barrel this very day, spit on all my success in this country, and hasten to America.” What motivated Shaya to say this to Falik? Knowing what we know now, how does Shaya’s statement foreshadow the devastating events that awaited the Jews of Russia and Eastern Europe who did not emigrate?

7. Sitting in the courtyard near the end of the stor, Falik shares his memories with Matle about their younger years and admits that his love for her is embodied in his devotion to their house. Falik tells Matle that when you love someone or something, you don’t just discard it. “Just because a head lacks a hat,” Falik says, “no one sells his head. As long as there’s a head, we’ll find a hat for it!” What was your reaction to this scene?

8. In the final chapter, Falik writes to his sons in America to tell them of the miracle that has taken place to allow him to remain in his home: that through Divine intervention, Kasriel the Lumber Merchant arrived out of the blue to rescue him and his house. How was this ending supported by the way Falik’s faith and religious life were portrayed throughout the story? How did you react to this ending?

9. Also, in the final chapter, Falik chastises his children for how they responded to his plea for help. He goes on to explain why he and their mother cannot move to live with them in America. He says, “An old tree, children, doesn’t let anyone rip it out unless you chop it down or break it into pieces. Plant it somewhere else in foreign soil, and it won’t grow anymore and will, in fact, dry out and rot. Why fool yourselves, children? Your mother and I are now old trees.” How do you feel about this statement? Do you know older people who have had the energy and resilience to make a significant move and thrive? How would you fare in such a situation?

10. Falik and His House is set in the Russian Empire at the turn of the twentieth century. What lessons does it offer to us today about how to live in a changing world while holding on to our faith, identity, and values?

Return to Falik and His House