Ai-ai-ai. A happy, sad, or disdainful exclamation depending on the circumstances.

Bar mitzvah. The initiation ceremony conducted when a boy turns thirteen and assumes the responsibilities and privileges of an adult in the Jewish community.

Dreidel. A small four-sided top used in a gambling game during Chanukah.

Kiddish cup. Ceremonial cup used during the benediction over wine.

Klezmer. Jewish musicians and the style of music they play.

Mentsh. A person; a moral and ethical person of worth and integrity.

Mezuzah. A box or case that contains a small parchment scroll with two blessings from the Torah. The mezuzah is fastened to the doorpost of a house or building.

Nosh. To eat or munch on something.

Oy. Similar to the expression, “Oh my!”

Oy vey. Similar to the expression, “Oh no!”

Reb. A title of respect similar to “Sir” or “Mister.”

Schlemiel. An inept or foolish person.

Shammes. Caretaker of a synagogue; the candle used to light the other Chanukah candles.

Sholem aleichem. An expression of greeting that means “peace unto you.” The response in return is aleichem sholem, “and unto you peace.”

Torah. The holy scroll on which the five books of Moses is written.

Vey iz mir. Similar to the expression, “Woe is me.”

Yahrzeit. The anniversary of a death. 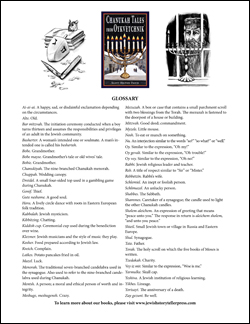