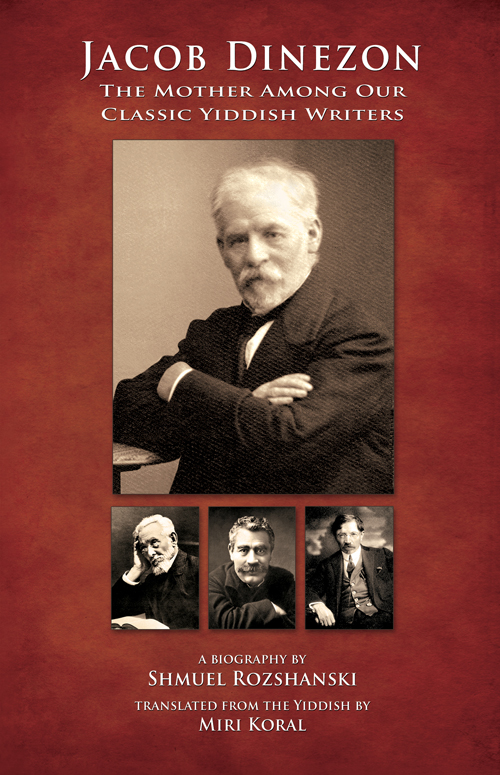 Jacob Dinezon: The Mother Among Our Classic Yiddish Writers is an insightful and well-documented biography about the beloved and successful 19th century Yiddish writer, Jacob Dinezon (1851?-1919), the author the Jewish Daily Forward called, “The Greatest Yiddish Writer You Never Heard Of.”

Credited with writing the first “Jewish Realistic Romance” and the first bestselling Yiddish novel, Dinezon was closely associated with the leading Jewish writers of his day, including Sholem Abramovitsh (Mendele Mocher Sforim), Sholem Aleichem, and I. L. Peretz—dubbed the “Classic Writers of Modern Yiddish Literature.”

Dinezon wrote poignant stories about Eastern European urban and shtetl life and focused on the emotional conflicts affecting young people as the modern ideas of the Jewish Enlightenment challenged traditional religious practices and social norms. Frequently, the plight of his characters brought tears to the eyes of his devoted readers.

In this Yiddish biography written in 1956 and translated into English for the first time by Yiddishist Miri Koral, the renowned literary historian Shmuel Rozshanski makes the case for including Jacob Dinezon in the “family” of classic Yiddish writers. Based on his extensive research and review of Dinezon’s major works, Rozshanski concludes that Jacob Dinezon deserves to be recognized as a major figure in the development of Yiddish as a literary language. If, as scholars suggest, Sholem Abramovitsh is the grandfather, I. L. Peretz the father, and Sholem Aleichem the grandson of modern Yiddish literature, then Jacob Dinezon, Rozshanski insists, should be considered the “mother” for his gentle, kindhearted, and emotional approach to storytelling and to his readers.

An important research book for scholars of Yiddish literature, history, and culture.

Shmuel Rozshanski (1902-1995) was a successful Yiddish newspaper columnist, theater critic, short story writer, scholar, and publisher. He served as the director of the YIVO Institute for Yiddish Research in Argentina (IWO) and edited the 100-volume series, Musterverk fun der yidisher literatur (Masterwork from the Yiddish Literature).

Miri Koral is the CEO and founding director of the California Institute for Yiddish Culture and Language. She is a Lecturer at the University of California at Los Angeles and is an accomplished English translator of Yiddish poetry and prose. Her work has appeared in the Forverts (The Yiddish Daily Forward), the Pakn Treger (Book Peddler), and the Yiddish literary journal Kheshbn (Reckoning). 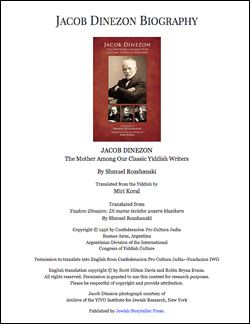 Jacob Dinezon: The Mother Among Our Classic Yiddish Writers is also available in paperback and Kindle ebook. Buy online or special order from your favorite bookstore.