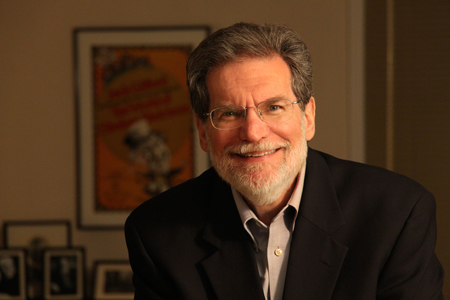 Davis: Jacob (Yankev) Dinezon was a major figure in the development of Yiddish as a modern literary language. He was not only a very successful writer in his own right, he was closely associated with almost every major Yiddish writer of his day, including Mendele Moykher Sforim, Sholem Aleichem, I. L. Peretz, S. An-ski, and Avrom Goldfaden.

How did you first discover him?

Davis: Actually, I only discovered Jacob Dinezon by accident as I was doing research on I. L. Peretz and Sholem Aleichem for a book of retold tales I was working on called Souls Are Flying! A Celebration of Jewish Stories. Dinezon’s name kept popping up here and there because of his early involvement with Peretz and Sholem Aleichem. But when I went looking for stories by Jacob Dinezon, I couldn’t find any because at that time, around 2003, none of his works had ever been translated into English.

What was your process for learning more about him?

Davis: Well, it was complicated, because unfortunately, I don’t read or speak Yiddish. But as I was going around sharing my new interest in this obscure Jewish writer, a friend in Raleigh, Kathleen Southern, discovered that Dinezon had written a book called Zikhroynes un bilder: shtetl, kinderyorn, shrayber—Memories and Picture or Memories and Scenes: Shtetl, Childhood, Writers. And I was able to actually purchase a copy of that book from the Yiddish Book Center. And at that time, Aaron Rubenstein, who was the collections manager, sent along a photocopy of a write-up about Dinezon from a Yiddish biographical dictionary. Of course, everything was in Yiddish, and after a futile attempt to enlist family and friends in the translation process, which turned out to be quite complicated, I finally decided to bite the bullet and hire professional Yiddish translators to translate both the biographical information and the book.

Where did you find Yiddish translators?

Davis: From the same place I found the book: the Yiddish Book Center. They had a list of translators online. And so I hired Ruth Fisher Goodman to translate the research materials and Tina Lunson to translate Zikhroynes un bilder into English.

So what did you find out about Jacob Dinezon from these translations?

Davis: What I found out was that by the turn of the 20th century, Jacob Dinezon a was a major figure in the world of Yiddish literature. He not only had a hugely successful first novel, Der shvartser yungermantshik (The Dark Young Man), which was published in 1877, his collected works, published after his death in 1919, filled eleven volumes. He was a staunch and vocal advocate of Yiddish as a literary language, and he advised and mentored Sholem Aleichem and Peretz early in their careers. In fact, Dinezon published I. L. Peretz’s first book of Yiddish stories and went on to become Peretz’s very best friend.

What did you learn from Zikhroynes un bilder?

Davis: What I thought was going to be a rather straightforward autobiography, actually turned out to be a collection of autobiographical short stories. So in two of the stories, Dinezon talks about his early interest in writing and his surprised reaction to the success of Der shvartser yungermantshik. There is also a wonderful chapter on the Yiddish theater and Avrom Goldfaden’s role in its early development. The rest of the book is made up of stories — some humorous, some poignant—describing various characters Dinezon encountered—or perhaps created—that offer us insights into shtetl life at the turn of the 20th century.

What made Dinezon different from the other important Yiddish writers of his day?

Davis: Sholem Aleichem is considered a Jewish humorist, the Yiddish Mark Twain, although several of his stories are dark and heartbreaking. Peretz was a modernist who had a way of taking old Jewish folktales and turning them on their ear with modern twists. Dinezon, on the other hand, wrote from the heart, not from the head. He is credited with writing the first sentimental Yiddish novel, and I think it is this heartfelt, emotional quality in his writing that makes him different from the other writers of this period.

How did your curiosity about a forgotten Jewish writer lead to your new career as a publisher?

Davis: Actually, I never planned on being a publisher. A little over a year or so ago, I retired from a long career in public television, and I hoped to spend my retirement dabbling in playwriting and Jewish storytelling. But even before I retired, I had spent some time trying to find an academic press to publish Memories and Scenes. I thought someone would be interested in these stories that shed light on a forgotten Yiddish writer. Well, the only academic presses that immediately responded did not publish fiction. The editor of one academic press expressed an interest and then held on to the manuscript for two years before he literally disappeared. (I heard later he had retired.) Another wonderful book editor took a look at the manuscript, liked it, but had to get it reviewed by “academic scholars.” It was like Siskel and Ebert giving their opinions: We got one thumb up and two thumbs down, and that was the end of having someone else publish it. And that’s when it occurred to me to take a tip from Dinezon himself, who published Peretz’s first book of Yiddish stories; and Sholem Aleichem, who published his own literary journal, Di yidishe folks-bibliotek. And with the new technology that’s available to us today in the form of print-on-demand, online sales, and Kindle ebooks, the obstacles to reaching an interested audience are greatly reduced. So I decided to start Jewish Storyteller Press to make Jacob Dinezon’s works available in English. In September we released Memories and Scenes: Shtetl, Childhood, Writers. And in November, just in time for Chanukah, we plan to release Jacob Dinezon’s Yosele, translated into English by Jane Peppler.

Why did you feel it was important to invest time and money to bring Dinezon’s works into the 21st century?

Davis: Though I didn’t take advantage of the opportunity to learn Yiddish as a young person—I’m afraid as a teenager I was more interested in girls than studying my grandparents’ foreign language—what did stick with me was a love for Eastern European yidishkayt and Jewish culture. That’s what attracted me to Dinezon’s stories and to Dinezon himself. Here was this writer who wrote powerful, poignant, and persuasive novels about the big issues facing Jews as they entered the 20th century. Yet he did it with great respect and loving-kindness. He was a strong advocate who didn’t poke you in the eye. His values were rock-solid and he worked tirelessly to help those who were less fortunate. So for me personally, nearly a hundred years after his death, he has become somewhat of a role model. Not to mention the fact that his works are essential to understanding the development of modern Yiddish literature.

My understanding is that your sister, Robin, also played a supporting role in bringing Jacob Dinezon’s works to light.

Davis: Yes, my shvester, my sister Robin Evans has been a huge supporter of the “Dinezon Project,” as I have come to call it. Growing up, Robin and I both attended the San Gabriel kindershul and Los Angeles mitlshul, and so we both carry this deep love of yidishkayt and Jewish culture. She is also a great supporter of the Yiddish Book Center. So over the years, she has been a great encourager and supporter of her meshugeneh older brother’s great adventure.

You have suggested that Jacob Dinezon is the “Uncle of Modern Yiddish literature”?

Davis: Well, it might be a little chutzpadik (nervy) for a public television producer to make such a claim. But hear me out: Sholem Aleichem dubbed Mendele the zayde, the grandfather, of Yiddish literature, and then went on to proclaim himself Mendele’s heir, the eynikl, the grandson. Scholars came along and called Peretz the tate, the father. Furthermore, many people who knew Peretz and Dinezon at the time said they acted like brothers. So as I started looking more closely at Dinezon’s relationships with these three writers—and finding photographs of Dinezon with each one of them—I started thinking, “Of course, Dinezon is the feter, the uncle.” And then I found this letter that Sholem Aleichem wrote to Jacob Dinezon in 1909:

“There is somewhere in the city of Warsaw, a tiny, spare, graying, little man with tiny but spotlessly clean little hands, with a little graying beard—it once was reddish—and with kindly eyes forever smiling, even when moist with tears. . . . He smokes little cigarettes rolled with his own little fingers; he drinks his own tea, made in his own little teapot; and he always sits on the same chair at the table, where he keeps hidden in a most unusually well-organized fashion, other people’s secrets, other people’s troubles, and other people’s anguish, which he holds so close to his uncommonly big heart. And this good uncle is called Uncle Dinezon.”*

So I say, “Read the stories and tell me what you think.”