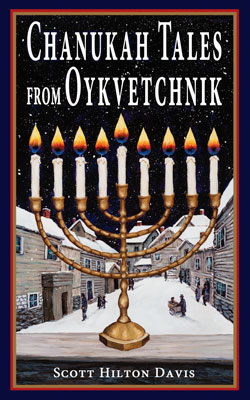 On October 1, in time for National Jewish Book Month (November) and Chanukah 2017 (December), Jewish Storyteller Press will release its latest title, Chanukah Tales from Oykvetchnik, via Amazon.com, BN.com, Powells.com, and other online and local bookstores. The publisher predicts the 120-page book will become a new tradition for an ancient holiday.

Chanukah Tales from Oykvetchnik is a collection of eight original Jewish folktales—one for each night of the Festival of Lights—written by Scott Hilton Davis (Souls Are Flying!, Between Heaven and Earth), with illustrations by Amy F. Levine.

On its website, Jewish Storyteller Press says, “Chanukah Tales from Oykvetchnik is a storybook to be read each year as the chanukiyah (nine-branched Chanukah menorah) comes off the shelf, dreidels start spinning, and the smells of freshly fried latkes waft through the house . . . [It] will fill your heart with the light of Jewish history, culture, and values.” The eight stories are:

1. Chaim the Chanukiyah
2. Myzeleh the Mouse
3. Dvorah Rohkl’s Chanukah Party
4. How Oykvetchnik Got Its Name
5. Reb Shimon the Shammus
6. Peter Markovich the Soldier
7. The Rabbi’s Daughter
8. The Pawnshop Menorah

An Emmy Award-winning public television producer and storyteller, Davis has spent many years bringing the works of his favorite 19th-century Yiddish writers to 21st-century English-speaking readers by publishing new translations, adaptations, and original stories based on the works of once-famous writers such as Sholem Abramovitsh (Mendele Moykher Sforim), Jacob Dinezon, Sholem Aleichem, and I. L. Peretz.

Chanukah Tales from Oykvetchnik (Oy + Kvetch + Nik) is Davis’s first book featuring his original stories. “Chanukah has always been my favorite Jewish holiday,” the author explains. “So it’s not surprising that when I finally began writing my own short stories, they turned out to be Chanukah tales set in the ‘Old Country’—the tiny towns and villages of Russia and Eastern Europe—before the turn of the 20th century. For many of us who are Jewish, this was the birthplace of our alte bobes and zaydes—our great-grandmothers and grandfather.”

In his review for Readers’ Favorite.com, book critic Jack Magnus writes, “Scott Hilton Davis brings to life the little village of Oykvetchnik and shares a glimpse into the village’s celebration of the Festival of Lights with his readers . . . . I was hooked by the stories and the history I was learning about this special holiday, as well as the culture and lifestyle found in the shtetls. Davis’s stories are grand fun for reading aloud, and Amy Levine’s black and white drawings work perfectly with each tale.”

Chanukah Tales from Oykvetchnik will be available in paperback ($9.95) and hardback ($16.95) at Amazon.com, BN.com, and Powells.com, and other online and local bookstores.

Jewish Storyteller Press was founded in 2007 as a way of celebrating Jewish literature, culture, and values by bringing the works of 19th-century Yiddish writers to 21st-century English-speaking readers. For more information: www.jewishstorytellerpress.com.